The Cookstoves Future Summit, hosted by the Global Alliance for Clean Cookstoves (GACC) in New York from 20th – 21st November 2014, brought together leaders from the international community to galvanise efforts to address the issue of household air pollution and to commit to mobilising resources to ensure the success of the Alliance’s objectives of fostering the adoption of clean cookstoves and fuels in 100 million households by 2020 (or approximately 500 million people – compared to the WLPGA Cooking For Life target of one billion people switching to LPG by 2030).

The main result of the summit was a pledge of some US$400 million to help scale-up clean cooking solutions around the world; however from the WLPGA perspective, a major outcome was the affirmation of the principal role of LPG as a solution to the health issues associated with household air pollution (HAP). 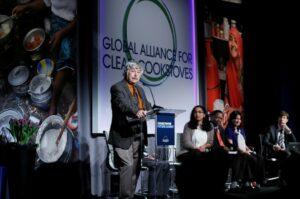 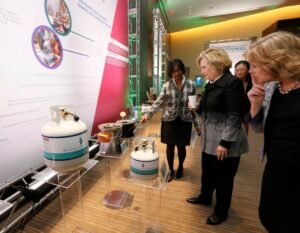 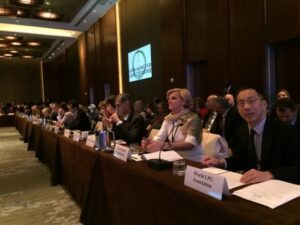 Highlights from the Summit

From WLPGA’s standpoint this summit was highly rewarding. Firstly the focus of the delegates and the principal actors within GACC has clearly shifted to focus on clean cooking as a process rather than on the stove as a piece of equipment. This opens the door to greater discussion on fuel choice, fuel sustainability and supply chain considerations. The discussion was also held in the context of household air pollution being principally a health issue rather than simply an to the realistic with a tangible acceptance that meeting the objective of improved health is not synonymous with growing the use of renewables and that required improvement in health cannot be achieved presently with biomass stoves. Professor Kirk Smith, probably the foremost academic expert in the world on household air pollution, gave a passionate speech in which he made the case that the solution for ill health caused by household air pollution is to cook with gas or electricity but not with biomass. Other specific examples of the growing awareness of LPG as a solution included a speech from Ms Hanna Tetteh, Ghanaian Minister of Foreign Affairs who announced that her government was planning to migrate 50% of the population (from 18% currently) to LPG from solid biomass by 2020, noting that one of the principal barriers being the need to switch ownership of the cylinders from the consumer to the distribution companies. This is a satisfying conclusion for the WLPGA since this was one of the principle findings from the WLPGA/UNDP workshop held in 2004 as well as our subsequent follow-up and recommendations in our GCN guidelines. Minister Tetteh described the plans of the Ghanaian government in the coming five years noting a planned investment of $5 million in developing a suitable regulatory framework; the purchase of 150,000 5kg LPG cylinders incorporating burner stoves and an awareness raising campaign. Mirroring the theme of the recent WLPGA Forum in London and in the words of Minister Tetteh, this project would “..make a world of difference”. Another issue that was raised was black carbon from biomass stoves and its negative impact on climate change. Ms Tami Bond, Associate Professor at the University of Illinois described the impact of black carbon on climate change and how, since it is short lived, a switch to a cleaner fuel that avoids black carbon emissions can have a rapid impact on climate change. This summit marked the transition for the GACC from phase 1 to phase 2: scale-up of initiatives. Some of the main challenges to scale-up were highlighted as lack of awareness of the issue from the consumer perspective and cost as a barrier to adoption. For the latter there was discussion (for instance proposed by Prof Kirk Smith) that, given the huge health burden associated with household air pollution, governments should consider financial support to clean cooking as a “social investment”, highlighting that the same is done with vaccinations. Dr Kandeh Yumkella, Chief Executive of Sustainable Energy for All, also mentioned the possible need for subsidies to ensure access to clean fuels. Dr Yumkella mentioned access to LPG stoves as a one of the principal measures to combat household air pollution.

The Friday sessions were introduced by a panel including Baronness Northover – UK Parliamentary Under-Secretary of State for International Development, Mr Børge Brende - Norwegian Minister of Foreign Affairs, Mr Rajiv Shah – Administrator of USAID and Secretary Hilary Clinton. Baroness Northover announced a pledge of US$50 million from the UK government  focusing on developing the evidence case; innovation; building demand; changing behaviour and empowering women. Mr Brende announced a pledge of US$40 million to support the activities of the GACC. Mr Shah advised that the US government, through various agencies would pledge US$200 million to develop, scale and test ground-breaking solutions for clean cookstoves. All speakers emphasised the necessity for Public Private Partnerships to achieve the GACC objectives and many of the financial pledges were linked to leveraging private sector investment.  Secretary Clinton characterised the issues as being a health challenge; an environmental challenge and an economic opportunity.

Following the high-level introduction, over 70 global organisations pledged their support to the objectives of the GACC. These pledges included bilateral donor commitments, comprising both financial and policy commitments, totaling US$286 million, including those made by Summit co-hosts Norway, the United Kingdom, and the United States. The private sector committed to mobilise an additional US$127 million, including a US$ 100 million fund created through a partnership between the GACC, Bank of America, Deutsche Bank, other development finance institutions and private investors which will support the scale-up of social enterprises that advance and deploy clean cookstoves and fuels. Above and beyond the bilateral commitments and private sector pledges, more than US$250 million in commitments were announced by implementing countries, including Summit co-host Ghana. Many other NGO’s including the WLPGA made commitments of in-kind support or specific targets for switching a number of households to cleaner cooking solutions. The pledge from some NGOs and governments to focus entirely on improved biomass stoves (e.g. Bangladesh and Nigeria) was somewhat incongruous given the clear statements made on the unsuitability of improved biomass stoves in meeting the necessary health objectives. It is assumed that that since these pledges were made in advance of the summit they could not be changed however it is hoped that in the light of the summit outcomes, some of these biomass-related pledges will be reviewed. The WLPGA pledge was made by WLPGA President Kimball Chen and is included in full as an addendum to this memo.

The impact for the WLPGA

The largest segment of consumption for LPG worldwide is cooking. This segment also probably presents the greatest opportunity for growth for the LPG industry which is why WLPGA has invested heavily in its Cooking for Life project. That GACC, the largest global initiative focusing on cleaner cooking, should now embrace LPG as one of the principal solutions should be seen as a major success for WLPGA’s advocacy efforts and also a huge opportunity for the LPG industry looking forward. Specifically a number of key conclusions from the summit impact WLPGA:

Excellencies, ladies and gentlemen, I am President of the World LPG Association, the global voice of the LPG industry, and also Chairman of the Global LPG Partnership, the public-private partnership established between governments, industry, NGOs and private sector investors to partner the developing world in transitioning people from cooking with solid fuels to LPG. These two organisations lead the United Nations Sustainable Energy for All High Impact initiatives for LPG.  The Global LPG Partnership, in partnership with host countries, commits: