A contract was signed in March between the WLPGA and Argus Media to extend by two further years (to 2016) the existing Global Statistical Review contract.

The contract is under the same terms as the previous one with the addition of a RPI (UK) adjustment in the final (additional) two years. 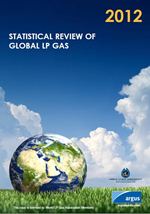 Following an intensive tender process in 2009 involving six companies a five contract for producing the Global Statistics was awarded to Datamonitor (UK). However in January 2012 Datamonitor (UK) decided to terminate the agreement.

Following negotiations, the contract was re-allocated to Argus Media, under the same terms as the Datamonitor contract, until 2014. Argus Media completed the transition from Datamonitor in 2012 and successfully produced the first publication under their new contract in September 2013.

Both parties were keen to restore the arrangement to a five year term and following negotiations earlier this year an extension was agreed and a contract was signed last month for Argus to continue to publish this flag ship WLPGA publication until 2016.

In addition it has been decided that the publication will again be produced for WLPGA members in hard copy from 2013. If non-members would like copies they should contact Phil Shaw at Argus Media on consulting@argusmedia.com.Members of the WLPGA will continue to receive the Global Statistical Review at no charge as part of the membership proposition.