The theme, Growth Through Safety, was decided through the need for sustainable supply, managing safety and the growth potential South Africa offers for LP Gas.

Providing the country with a secure electricity supply remains a challenge to the extent that the provider, Eskom, is encouraging consumers to consider LP Gas as an ideal alternative for their cooking and water & spatial heating needs.

The country is facing many challenges with illicit practices in the LP Gas cylinder trade so it was also agreed to run a good business practice workshop the preceding day focusing on cylinder management.

The 2013 Annual Conference of the Liquefied Petroleum Gas Safety Association of South Africa (LPGSASA) was viewed by the delegates as both interesting and highly informative, with the contributions from the WLPGA being one of the highlights.

Over one hundred delegates heard of the potential growth opportunity for LP Gas in South Africa and the need for import facilities to cater for the increased demand. Speakers included representatives from the Ministry of Energy, the Competition Commission, a company planning to invest in a new import terminal next year, and a law firm describing how companies can and should, protect their brand.

WLPGA Director David Tyler spoke of the WLPGA’s activities including the Cooking For Life programme and how it fits with the South African objective of moving the population to LP Gas. Compared to North Africa, the rest of Africa is lagging well behind in the use of LP Gas with per capita consumption levels a factor of ten lower.

The South Africa LP Gas Association then described their training activities which are being enhanced with new programmes.   Kevin Robertson, Communications Manager, LPGSASA said ‘With a national focus on LP Gas as an exceptional alternative energy to electricity, the growth potential of the product is exciting to say the least. However, in light of this, many new players are entering the market, not all of whom see safety as a priority’.

Robertson also stated ‘The LPGSASA and its responsible members and industry players will be hard pressed to maintain the enviable safety reputation which the industry currently enjoys. As the industry grows and with the promise of at least three new import/storage facilities planned for construction over the next few years, the function of the LPGSASA’s Conference and four Regional Workshops scheduled for 2014 will be pivotal. Cooperation and support from the WLPGA and other related associations will also have an important role to play’. 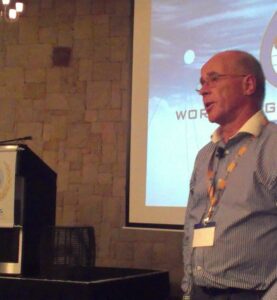 Over sixty delegates from across the country attended the workshop which was facilitated by David Tyler. After a brief introduction to the product, cylinder design and how they affect safe and efficient storage, handling and distribution methods David outlined the WLPGA’s stance on good business practices with an introduction to some of the Association’s latest documents. The workshop then focused on a case study describing a fictitious event involving a leaking cylinder – which had been illegally filled – which had led to a fatality in a domestic household. The delegates were asked to play the role of four different stakeholders in the case including a television company that was planning to cover the story in a current affairs programme. The enthusiastic feedback from all delegates allowed everyone to thoroughly discuss the implications of illegal filling on the LP Gas cylinder business, what can be done to mitigate against these illegal practices and the importance of the media in the event of an incident.