Repsol and Renault Support the Sale of Autogas Vehicles 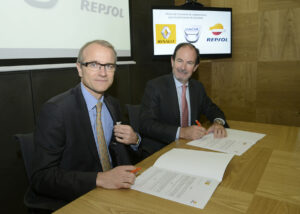 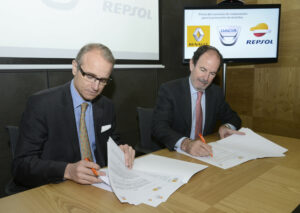 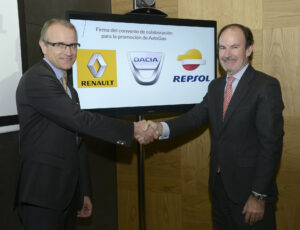 Repsol's director of LPG Products for Spain, Francisco Javier Villacorta, and the Renault Group director of marketing for Iberia, François Grandjeat, signed a strategic agreement to promote the sale of AutoGas vehicles in Renault-Dacia dealerships and reinforce both companies' commitment to the alternative vehicle market, in place since June 2014.

With this new agreement, Repsol, the leading Autogas distributor in Spain, offers its potential to the Renault Group, which has a wide range of vehicles fuelled by this alternative fuel, also known as LPG. Repsol currently has over 300 Autogas refuelling points which are continuing to grow at a rate of about 100 supply points per year in Spain.

Furthermore, it has about 300 LPG skid stations located in companies and professional organisations that use LPG in their vehicles. The Renault-Dacia group has seven models available in Spain that use Autogas: Renault Clio, Dacia Sandero, Logan, Logan MCV, Duster, Lodgy and the commercial vehicles Dokker and Dokker Van. "The agreement with Renault strengthens the Repsol Group's commitment to offer a wide variety of clean and efficient fuels at a competitive price, as well as to sustainable mobility that meets the customers' needs", said Francisco Javier Villacorta. François Grandjeat noted that since signing the agreement "Dacia LPG profits in Spain multiplied by ten between 2013 and 2014 and continue growing rapidly in 2015. Lodgy, for example, already dedicates 28 % of its sales to LPG and is a taxi market leader in Madrid, with a market share of 37 % in the sector.

It's an exciting situation that confirms our commitment to this technology."

Autogas is the most used alternative fuel in the world. It's used in 25 million vehicles, of which 13 million are in Europe. Around 37,000 cars use Autogas in Spain.

The cars that use Autogas provide economic and environmental advantages. From the economic perspective, they represent savings of 40 % compared to traditional fuels. Furthermore, they contribute to the improvement of urban air due to their low particle and nitrogen oxide (NOx) emissions. They also help minimise the greenhouse effect due to their reduced CO2 emissions.

These advantages place it amongst the alternative fuels with the most support from Spanish authorities, with the tax rebate on the Impuesto sobre Vehículos de Tracción Mecánica (Tax on Mechanically Powered Vehicles, IVTM) and public grants from the plans PIVE 7 and PIMA Aire.

Autogas increases the vehicle's lifespan and its bi-fuel technology makes it more versatile. These automobiles are equipped with two tanks, one for petrol and the other for LPG, which are used indiscriminately according to the driver's need. They have the same specifications as a normal vehicle, but driving is smoother, quieter and vibration free.