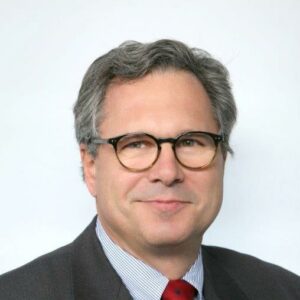 It all goes back to 2012, when the World LPG Association (WLPGA) started looking in depth at the use of LPG as a marine fuel, opening up a completely new market segment with very promising opportunities.

At the time, the use of LPG as a marine fuel was little known. It was only known as a fuel in small boats, in a similar way as Autogas is for cars, mostly from conversions, and for some new outboard engines, mainly from the US. This started a long journey within the LPG industry, a journey that embraced the use of LPG as a marine fuel, not only in the small outboard engines, but spreading much wider, with the largest engines that can be found today that power the very large gas carriers (VLGCs).

From the start of the journey for cleaner air and water, and the reduction of harmful emissions (the key benefits of LPG in all applications) the WLPGA embraced all sector stakeholders. We contacted engine manufacturers and developers, classification societies, vessel builders, standards developers, regulators and authorities, to raise awareness about the many benefits of the use of LPG as a marine fuel, and try to coordinate activities. We produced studies, supporting collateral, and took part in various events, conferences and exhibitions, to demonstrating the case for LPG as a marine fuel. 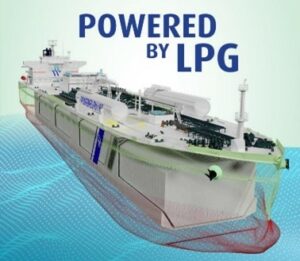 These efforts were further accelerated with strong mandates from the International Maritime Organization (IMO) to reduce emissions in the marine sector and decarbonise shipping. In January 2020, the IMO introduced a sulphur cap to reduce SOX emissions, capping the fuel sulphur content from 3.5% to 0.5% for ships operating outside Emission Control Areas (ECA). The IMO GHG Strategy that followed, targeted cutting greenhouse emissions from international shipping by at least 50% compared to 2008, by 2050. It also targeted a reduction in Carbon Intensity of international shipping (to reduce CO2 emissions per transport work) by at least 40% by 2030, pursuing efforts towards 70% by 2050. A first wave of concrete regulations will take effect in January 2023.
Image Credit: BW LPG

It became clear that new alternative fuels were needed to replace conventional fuels in shipping, with LPG being one of the best amongst them.

Today, about 12% of all the new vessels that have been ordered have been designed to run on alternative fuels. This is a figure that has doubled in just one year. Of this 12%, the LPG fuelled ships occupy the third position on the list, with 1.5%, following LNG fuelled ships in first position with 6.1%, and electric/battery alternatives in second with 3.85% (source: DNV). As of September 2021, a total of at least 102 LPG fuelled ships are on order or already sailing.

It is now evident that the merits of LPG propulsion are well understood in the shipping industry. LPG is an alternative fuel that offers significantly lower exhaust emissions, and the fact that it is not a GHG, i.e., its combustion or accidental release does not produce effects similar to methane slip, also gives it an additional advantage when considering GHGs and CO2 reduction and global warming potential. LPG is available already everywhere around the globe, its use is based on simple and mature technology, and installation on vessels and supporting equipment are of lower cost compared, for example, to LNG (the LPG technology is not cryogenic) or ammonia and hydrogen. With existing storage and terminals infrastructure worldwide, plus an extensive fleet of small LPG carriers that can operate easily ship to ship bunkering, it is a solution that is available today.

Another key advantage of LPG is its volumetric energy density. The volumetric energy density impacts the size of the storage tanks required to be installed on the vessel to carry the fuel, an important parameter for a ship designer and operator. Marine Gas Oil (MGO) has the highest energy density from the various fuel options, but LPG would require tank capacity only 1.4 times larger compared to MGO, whereas LNG, methanol, ammonia and hydrogen (liquefied) would need 1.6, 2.3, 2.9 and 4.3 times larger tank capacities respectively for the same energy needs (source: DNV).

LPG is today in its majority a fossil fuel. However, with growing supplies of renewable LPG, and bioLPG coming into the market (a drop in solution for vessels operating already on LPG), as well as with other possible renewable LPG blends, significant additional CO2 savings (up to 80%) can be achieved, compared to its fossil counterpart, something that can dramatically improve the carbon footprint of a vessel.

Carbon capture and storage technologies (CCS) are in rapid development today, and these will also offer significant future CO2 savings for vessels operating on fossil LPG, vessels which are already ahead on emission reductions also of other pollutants.

Finally, as LPG has some common properties with ammonia, the other alternative future fuel, vessels operating on LPG today can be retrofitted at low cost to operate on zero carbon ammonia in the future, if they have been designed as ammonia ready (already today there are LPG carriers that transport ammonia and vice versa).

Environmental and shipping regulations, mainly from IMO, will continue to become increasingly demanding, and at a fast pace. LPG however, being already IMO 2023-2025 compliant, supporting the 2050 IMO GHG strategy, and with excellent credits towards 2050 with its bio and renewable drop in options, it is for today, and tomorrow, one of the most credible alternative marine fuel solutions.

I fully agree with the powerful DNV statement in its latest Maritime Forecast to 2050 report that “LNG and LPG are currently the only alternative fuels that are scalable commercially and globally for long-distance transport at sea”.

About LPG as a Marine Fuel

LPG/Propane, is increasingly being used in marine engines in various types and sizes of vessels, from small leisure crafts with outboard engines, to fishing boats, patrol boats and larger vessels. It is an efficient marine fuel, it reduces exhaust emissions and eliminates the risk of fuels spills on the water.  All information related to LPG as a Marine Fuel can be found on this page: Marine - WLPGA 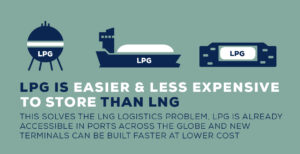 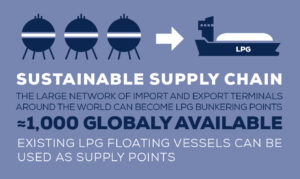