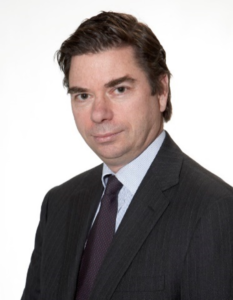 Five years after presenting at the 29th World LPG Forum in Florence, and winning the LPG Innovation Award for the presentation on what was then a 194MW project in Tema, Ghana, the project is currently being commissioned and coming online. The configuration has slightly changed since 2016 with 5 GE TM2500 turbines laid out in combined cycle rather than open cycle to increase efficiency. The project has received its first deliveries of LPG.

In early 2017, the WLPGA created the LPG to Power Working Group. Whilst LPG has some way to go to become a mainstream feedstock for power generation the number of installations operating on LPG has increased significantly over the past years. This trend is reflected by the fact that LPG has very similar attributes to natural gas when used as feedstock for power generation. However, LPG offers multiple benefits particularly for power plants of up to 250MW in output. The benefits are all linked to LPG infrastructure as well as logistics that trump those for LNG (Liquefied Natural Gas) when considering smaller power projects.

Firstly, LPG infrastructure is present in more than 130 countries which is more than three times as many as for LNG. This includes import terminals with associated infrastructure and often a regulatory environment for the handling of LPG. LNG terminals are almost always designed for the import of large volumes of LNG (160,000m² or more). As a consequence, the global LPG shipping fleet is larger in terms of number of ships and more diverse in scale than the LNG fleet which almost exclusively consists of large-scale tankers requiring berths of greater depth, significantly limiting the locations where these large ships can call on.

Secondly the logistics for LPG are less costly than for LNG. Whereas LPG can be transported relatively easily by truck, similar to diesel or HFO (Heavy Fuel Oil), LNG requires the transport by cryogenic trucks that can secure transport of the liquefied gas at minus 162 degree Celsius leading to higher capital investment.

We have seen an increased interest in power installations of up to 5MW particular in locations where decentralised or distributed power is needed – often off-grid or to guarantee power independence. Examples can be found in the Caribbean in places like Puerto Rico, Jamaica and the US Virgin Islands, where LPG distribution networks are well established and the pricing of LPG is very competitive allowing hospitals and medium sized businesses to install LPG powered units for their respective energy consumption. Units generating 1MW of electricity consume roughly four tons (MT) of LPG per day when operating at full capacity. A 25MT ISO tank will provide adequate fuel for six days and can be easily hauled by truck.

LPG provides environmental benefits especially when compared with liquid fuels such as diesel or HFO. The cleanliness of burning LPG for power generation purposes has led to the installation of LPG capable units particularly on islands and in resorts as a reliable source of power. Small scale turbines have been successfully deployed across North America and the Caribbean.

LPG has also found a place as a fuel for back-up power in various places across the globe. Multiple alternative LPG storage sites created an opportunity in central Chile to construct the Teno power station delivering 45MW as a back-up facility for intermittent renewables. In Togo an 80MW power plant is being constructed that will primarily rely on natural gas delivered from the West Africa Gas Pipeline (WAPG) but is laid out to use LPG as a back-up fuel because of the intermittency of the flow of natural gas. Similar in size, Haiti is in the process of constructing a 70MW LPG to power plant to address the electricity shortfall in the country.

Untapped is the potential to use LPG in hybrid power installations. Renewables are generating competitively priced electricity which, however, is intermittent and therefore not dispatchable whenever the wind does not blow or the sun does not shine. LPG should be considered as the clean fuel of choice. Often renewable energy sources in developing countries are complimented by engines running on diesel or HFO. This runs contrary to the environmental benefits that renewables provide.

The fact that LPG is widely used for cooking and heating in many countries across the globe has created the infrastructure and the legal preconditions for the import and handling of LPG. Taking advantage of this existing set-up is a major advantage offered by LPG compared with natural gas or LNG.

Disclaimer: The views expressed in this article do not necessarily represent the position of the WLPGA 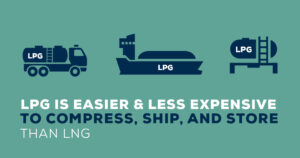 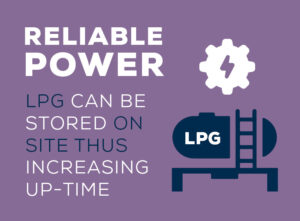