WLPGA met Dave Keating, Brussels Correspondent for France 24, and took the opportunity to ask him about key issues in the global Autogas industry. 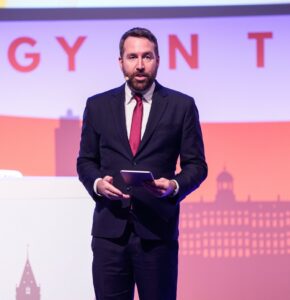 WLPGA: Hi Dave, thank you for taking the time to speak with us. We have a few questions for you, first of all what do you think the short to mid-term impact of COVID-19 will be on private car ownership, public transport, shared mobility?

Dave Keating: During the lockdown we saw a kind of mobility experiment in action, giving us a glimpse of what city centres would look like without cars. Many people have expressed interest in maintaining this way of life even after the lockdowns end. City authorities have taken measures to respond to this. For instance, Milan is pedestrianising streets previously used for cars and Brussels has designated its city centre as a pedestrian zone where walkers and cyclists always have the right away and cars can’t go more than 20km/hour.

But at the same time, concerns about public transport will inevitably make private car ownership more appealing, both for short and long journeys. Governments are still warning people to avoid public transport if possible, and are mandating the use of face masks when taking it. The hope is that people will cycle instead. But for many people this will not be an option as their workplaces are too distant. A car would be their only alternative. Similarly, many people are opting for long road trips this summer rather than risking taking a train or airplane. This is both over health fears and concerns that the flight or train will be cancelled last minute, and passengers will be unable to obtain a cash refund as airlines have been refusing to comply with EU passenger rights law.

Shared micromobility solutions are one attractive solution to public transport for people who live in cities, but ironically their availability is disappearing just as the need for them is increasing. Uber’s shared ebike scheme Jump has shut down, with the bikes in theory going to Lime. In the months before the lockdown, cities cracked down on shared escooters and many have disappeared from the streets. But given the sudden renewed interests, it seems like they will probably return soon.

WLPGA: How do you think governments and citizens alike can reconcile the need for mobility and kickstarting the economy with air quality goals? Are bans on the ICE and low-emission zones the answer?

DK: There has been a lot of media attention on the sudden improvement in air quality caused by the COVID-19 lockdowns, as a combined result of the slowdown of industrial activity and economic activity. Environmental campaigners have been wary of making too much of this, because they don’t want people to extrapolate the message that only a major slowdown of economic activity can improve air quality and halt climate change. A more sustainable solution is needed.

As economies are restarted, inevitably air pollution and carbon emissions will rise again. The question is how the use of public money, particularly the EU’s €750 billion recovery fund, can be used to prioritise clean investment that is in line with the EU Green Deal and the Paris Agreement.

A phase-out of the internal combustion engine was already envisioned in the Commission’s white paper on transport a decade ago. But recently we’ve seen cities establishing low-emissions zones in their city centres challenged by courts. What’s become clear is that a patchwork of different regulations in various cities is not a workable solution. Such policy needs to be developed at EU and national level if it is to work, but so far there hasn’t been the political will to do so.

WLPGA: Electric vehicles seem to be the chosen technology of the future by policymakers. Why do you think that is? What does the transport energy mix of the future look like?

DK: There is evidence that the EU’s car CO2 limits has already resulted in a big increase in the production of electric cars by automakers, and an accompanying increase in the marketing. But the issue of ‘range anxiety’ is still a big roadblock, with consumers concerned there isn’t enough infrastructure for them to fuel their electric vehicle.

Ideally, the transport energy mix of the future would see compatible charging infrastructure across the EU, with the use of fossil fuels to power traditional combustion engines steadily phased out. We may get to a point where fossil fuels are gone from passenger vehicles but remain for shipping vehicles. Although hydrogen is another interesting technology being explored for the latter.

WLPGA: There are over one billion cars on the roads today. Is the air quality solution different for the existing fleet vs new car sales?

DK: While much of the focus of policymakers has been on new vehicles in the fleet, the cars currently on the roads are going to be with us for a long time. There has been some exploration of retrofitting, which could be a very interesting solution.

WLPGA: Dave thank you very much for your time and comments.