Announcing the Launch of Copa Energia

Copa Energia is born after the acquisition of Liquigás by Copagaz

The new company has become the largest LPG distributor in Latin America, and has plans to invest in renewable energy sources

By the end of 2020, one of the largest transactions in the country this year has significantly changed the Brazilian market of Liquefied Petroleum Gas (LPG), popularly known as ‘cooking gas’. Copagaz acquired Liquigas through a consortium formed with Itausa and other companies of the segment.

As a result of this acquisition, Copa Energia is already born as the largest LPG distributor in Latin America, with operating units in 24 Brazilian states and the Federal District, around 4,500 employees, about 9.5 million cylinders of bottled LPG per month, and 32,000 business customers. Despite having independent operations, Copagaz and Liquigás, whose product brands are already renowned and well-established in the Brazilian market, are now jointly responsible for the leadership in the distribution of LPG in Brazil.

Always with an eye on opportunities, Copa Energia sought alternatives overseas and imported LPG from the international market. It was the first company in the country to import LPG from Bolivia, shipping it by truck.  The company repeated this pioneering feat by bringing liquefied gas in tanker ships from Argentina. The goal was to reduce dependency on the domestic market, thereby increasing the security regarding local supply to its customers, and reducing the possibility of decoupling gas prices from the international market.

“The opening of the market tends to make our sector more competitive, thus enabling the use of the popularly known ‘cooking gas’ for other purposes.  LPG could be used more widely in industrial, residential and agribusiness applications so as to increase Brazil's competitiveness, such as it is seen in many other countries.

Besides, LPG is a sustainable energy alternative with low waste emission in the environment, and which stands out for being one of the most economical among energy source options”, highlights Caio Turqueto,  CEO of Copa Energia.

The company’s product portfolio also features a brand of specialty gases for aerosol sprays, Purogas, which are odorless and free of impurities and humidity. Due to its high degree of purity, this product is employed by several manufacturers of deodorants, cosmetics, food products, medicines, air fresheners, and insecticides, among others.  Purogas is delivered in customized butane / propane mixture ratios according to the needs of each customer.

Renewable energy as a business strategy

In addition to the leadership position in the LPG industry, Copa Energia was born with aspirations to lead changes both to Brazil’s and the world’s generation mix, based on sustainable, reliable solutions that deliver solid results. “Copa Energia is not just a gas company, we are an energy company. And we are going full-throttle into this sector”, says Turqueto.

To this end, the company has already deployed clean energy projects in the country, such as a 4 MW “CGH” (a small, up to 5MW) hydroelectric plant already operating in the city of Campo Bom, in the State of Santa Catarina,  and a second CGH unit, Libera Maria, under construction in the Parana State. Together, these CGHs are receiving investments of about 25.5 million Reais.

There is also a 2 MW capacity solar plant in Mato Grosso that supplies the telecommunication companies owned by Grupo Zahran in the Central-Western region of the country. The company's investment plans also include, among other, a power generation plant using bio LPG.

In addition to its pursuit of energy production from other renewable energy sources, Copa Energia seeks partnerships with academic circles to contribute to the advancements of scientific research in Brazil and to develop alternative sources, preferably non fossil-fuel options of energy production.

In February 2022, for example, the company signed a cooperation agreement with the University of Sao Paulo (USP) to develop over the next four years a project of Bio LPG, a gaseous fuel of renewable sources, which is obtained from waste treatment, sugarcane bagasse, and vegetable oil among others—this renewable gas has the same performance as LPG.

Yet another initiative underway together with the Federal University of Mato Grosso do Sul (UFMS) explores new uses of LPG for energy generation at places not connected to the power grid, as well as for heating fish breeding ponds.

“We are committed to expanding our focus on the energy field, seeking opportunities and solutions that minimize the environmental impact by using our physical and knowledge platforms efficiently”, says VP of Strategy and Market at Copa Energia, Pedro Zahran Turqueto.

Copa Energia dates back to 1955, when it was founded in the city of Campo Grande (State of Mato Grosso do Sul) by businessman Ueze Zahran. As a holding company, it controls Copagaz and Liquigas, two traditional brand names that together lead the Brazilian market of gas bottling, supply and distribution of LPG–the liquefied petroleum gas popularly known as cooking gas–being responsible for catering to 25 percent of the domestic market through over 7,500 resellers who deliver 5 cylinders every second across the country.

The company owns Purogas, a brand of specialty gases for aerosol sprays, which are odorless and free of impurities and humidity. It operates in 24 states and the Federal District. Copa Energia has over 4 thousand employees and 10 billion Reais in net revenues. 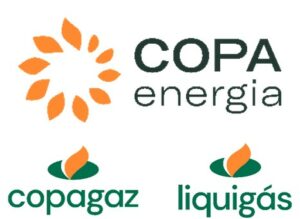