Home > WINLPG India attend LPG Panchayat organised at Rashtrapati Bhavan in the presence of Hon’ble President of India
Published on 08.03.2018 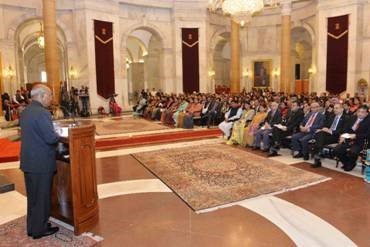 An LPG Panchayat was organised at Rashtrapati Bhavan, the official home of the President of India, in the presence of Mr. Ram Nath Kovind, Hon’ble President of India. Mr. Dharmendra Pradhan, Minister for PN&G, SD&E along with women Member of Parliament from various constituencies, eminent personalities from all works of life, senior officials from MoP&NG and Oil Marketing Companies were also present during the occasion.

104 women of BPL families from 27 States, who benefited from the Pradhan Mantri Ujjwala Yojana joined the occasion to share their life changing experiences.

Addressing the gathering, Honorable President expressed his happiness on the progress of the Pradhan Mantri Ujjwala Yojana with over 3.4 crore customers enrolled within 21 months of the launch. He said that Ujjawala Yojana is strengthening women’s empowerment.

He congratulated the Ministry of P&NG for efforts to advance social justice through the health, welfare and empowerment of women. He was confident that the taking place of LPG Panchayats as part of the Ujjwala Yojana process will prove very useful.

Mr. Kovind, added that women of rural poor households have been the victims of ill-health due to use of polluting fuels. This scheme has helped the women to come out of this menace and help them lead a healthier and happier life. He further said that a cleaner and healthier kitchen, socio-economic inclusion of women, and more availability of time are some of the benefits of the Pradhan Mantri Ujjwala Yojana.

Speaking on the occasion, Mr. Pradhan said that the objective of PMUY is not only to distribute LPG connections but to address and reduce the health hazards being faced by women who are still using conventional fuels for cooking. Already having released 3.4 crore connections under PMUY, we are committed to achieve the revised target of 8.0 crore connections within the deadlines.

Adding further, he said that LPG Panchayat is serving as a platform to interact with the beneficiaries, harness their experiences and integrate them to create a knowledge base for triggering a sustainable and viable movement around Ujjwala. These meetings will reaffirm the need for safe and regular LPG usage.

During the event, 5 PMUY beneficiaries shared their personal experiences of the deep impact made in their lives after shifting to LPG in their household. Sharing one such experience, Ms. Narayani Bai Sahoo, a beneficiary of PMUY from Chhatisgarh, said that “…Though we cannot buy time but by buying LPG connection under Ujjawala scheme we have been able to save time…” She further said that she is utilising this time for tailoring and earning enough to finance her LPG refills and supporting her children’s education.

LPG Panchayat is a community meeting which is serving as a platform for LPG consumers to interact with each other, promote mutual learning and sharing of experiences. Bringing together about 100 LPG customers together near their living areas on an interactive platform, it seeks to discuss about safe and sustainable usage of LPG, its benefits and the linkage between use of clean fuel for cooking and women empowerment. Also, it provides an interaction opportunity for consumers to interact with various stakeholders from the LPG ecosystem such as OMC officials, distributors, mechanics and deliverymen, who would address their questions and apprehensions.

LPG Panchayats will also be used as a forum to re-inform the new LPG users about some of the ongoing schemes such as MUDRA, STAND UP India, Sukanya Samridhi Yojna, National Rural Livelihood Mission (NRLM), encouraging them to access the benefits of these programmes.